It takes a lot of people to do Saturday Morning Physics at Fermilab. Our fantastic team is …

Dr. Ramson is a postdoctoral researcher in the Fermilab Neutrino Division. He currently works as part of two large experimental collaborations at the cutting-edge of long-baseline neutrino physics: the currently operational Numi Off-axis Electron Neutrino Appearance experiment (NOvA), hosted by Fermilab, and the upcoming Deep Underground Neutrino Experiment (DUNE), also hosted by Fermilab. Howard University is his Alma-Mater and he earned his doctorate in Applied Physics on studies of nuclear anti-matter at the University of Michigan-Ann Arbor. Much of his graduate work took place as a visiting scholar on the Argonne/Fermilab particle physics experiment, E906/SeaQuest. Before going to the University of Michigan, he was a visiting scholar at the National Aeronautic and Space Administration from Howard University, primarily involved in the measurement of cloud properties in the vicinity of Washington, D.C. and the validation of a globally distributed robotic aerosol and cloud measuring system.

His current research interests involve the study of neutrino-nuclei interactions and the testing of new light-sensing hardware to be included in DUNE. When he is not thinking about quarks and leptons, he enjoys reading, exercise, and video games. Dr. Anderson is also a Leon Lederman Fellow at the Fermilab Center for Particle Astrophysics.  He received his PhD from The Massachusetts Institute of Technology (MIT). His focus is the search for dark matter in the universe. This work takes him to the South Pole to work on the telescope from time to time. Dr. DiPetrillo is a Lederman Fellow at Fermilab, and works on the CMS experiment. She recently received her PhD from Harvard, working on the ATLAS experiment. As a PhD student, she spent most of her time looking for long-lived particles and working on the ATLAS Muon Spectrometer. Karri is originally from the Providence area and received her BS from Brown University in Physics. Dr. Perloff is a postdoctoral researcher for the University of Colorado Boulder and a member of the Compact Muon Solenoid (CMS) Collaboration at CERN. He received his BS in physics for UCLA and his PhD from Texas A&M University working on a search for the Higgs boson. As a graduate student, he also spent a great deal of time working on jet energy calibrations, both for current analyses and for detector upgrade projects. Today, Alexx’s research focuses on searches for supersymmetric particles as well as other exotic models of physics. He also works on the upgrade of the CMS L1 trigger system, focusing on track reconstruction and track-based objects. When not at Fermilab, Alexx enjoys swimming, biking, running, and rock climbing. 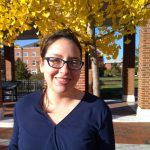 Dr. Cristina Mantilla Suarez is a Lederman Fellow at Fermilab. She completed her undergraduate degree in physics at the National Polytechnic School in Quito, Ecuador, in 2016 and received her Ph.D. from Johns Hopkins University in 2020, under the supervision of Prof. Petar Maksimovic. As a graduate student she was supported by the URA Visiting Scholars program (2017) and the LHC Physics Center Graduate Scholars program at Fermilab (2019). Her research focuses on measuring the properties and couplings of the Higgs boson at high-energy colliders, and expanding the search for particle dark matter to lower masses and lower couplings at high-intensity accelerator experiments.

Learn about the evolution of the Fermilab Saturday Morning Physics Program.